Terv: Why did I imagine that you did a little body roll there?

Didi: Because that’s the kind of thing you would do.

Terv: Wow! To think I’m always so nice to you and this is how I get rewarded. Anyway sha, happy International Women’s Month babes! A day is hardly enough so I declare March our month

Didi:LOL! Happy International Women’s Day to all our ladies.

Terv: Didi, I thought about sending you food or something cute for Int. Women’s Day, but my bank account wouldn’t recommend it.

Didi: That’s okay. Just set a reminder for month end when your bank account will certainly be   in influencer mode…recommending things and what not.

Terv: Hmmmm…where’s a getaway car when you need one?

Didi: Trying to Bolt away I see.

Terv: So on today’s banter, what are we talking about?

Terv: Cool. Let’s establish some context. International Women’s day is a global “holiday” celebrating the achievements of women. It’s also a focal point in the women’s rights movement to draw attention to women’s issues: from gender equality to reproductive rights and violence against women. Notice how the “holiday” is in air quotes, because somehow this is a holiday with no breaks.

Didi: Like we needed another reminder that Women never catch a break

Terv: LOL! Facts. So where do we begin? Burger King?

Didi: Uhh okay. So Burger King ran a campaign to give culinary school scholarships to women who would like to become chefs. Core channels were a Newspaper ad and social media: Twitter most prominently. Across all their channels, the headline was “Women belong in the kitchen,” essentially using provocation to draw readers in; and on Twitter, they made this a thread, with their headline copy as the first Tweet.

I see people had mixed feelings about the campaign but I particularly liked it. I thought it was a great way to get people to engage in a conversation that they otherwise would not have.

Terv: I’m one of the people that had very mixed feelings about the campaign. I agree that the seemingly salacious title was effective as an attention grabbing technique and I also agree that the campaign is on brand, first because it speaks to a gap in the food industry (i’m still mind blown that only 7% of head chefs are women) and because Burger King’s entire identity is built around zigging when the rest of the world zags. However, and it’s a big however, we’ve seen time and time again that this click-bait approach to brand messaging almost always backfires. You’ll get away with it in traditional media but social media is it’s own beast and I’m surprised that for a brand that’s so familiar with Twitter, they somehow did not see this coming.

Didi: I still think the campaign was a success. The main tweet is closing in on over 155k retweets and the other two have over 85k likes, organically. Sounds hella successful PR-wise to me.

Terv: Anything clickbaity will get the numbers and to be honest, the initiative is pretty good BUT 1) Any Tweet, no matter how well meaning that get’s patriarchy Twitter agreeing with you (even when they essentially take a small bit of a whole message out of context) already puts you on the wrong side of history 2) any campaign that means that your CMO will spend the entire day replying comments on Twitter in an attempt to explain the brands position is a real whopper in my opinion. I guess we’ll agree to disagree on this one.

Didi: Yeah, let’s come back home. What did you think of Pitstop’s campaign?

Terv: So Pitstop’s campaign I thought was super cool. We don’t talk about the gender pay gap nearly enough in African markets and I thought the storytelling approach was very clever. Where I struggled was with the ambiguity of the mechanics. When a brand takes on a just cause, it has to be careful to not fall short of transparency itself. Pitstop told us that they are taking a stand to equalize women by letting women pay less for meals. But they did not tell us what discount women get, how much % of their meal price was being waived, what the terms are, etc and while I enjoyed the narrative, on principle, I found the execution problematic.

Didi: Exactly. I loved the campaign but the execution could have been better. With a bit more context on what the pay gap is and the discount women get, more women might have been compelled to give them a try.I just reviewed the ad again and it seems you can only retrieve the discount online. That’s not good enough. However, I’d say it’s probably one of the best local campaigns we saw this year.

Terv: Messaging wise, I agree! It certainly helps that the bar was pretty low. Similar to the Valentines Day campaigns we reviewed weeks ago.

Didi: Are we going to talk about Purple bank?

Terv: So every year, Purple Bank gives us something to talk about on International Women’s Day. It’s like someone in the team wakes up and says “How can we offend women in honour of Women’s Day?”

Didi: While simultaneously excluding the majority of our customers. If I recall correctly, the bulk of Purple Bank’s customer base are the Gen Xs. Still, the bank’s communications team constantly chooses to send out poorly formed jokes whose premise only people who spend an awful lot of time on Twitter can understand.

Terv: Imagine being 40+ and opening your mail to a message reminding you about why you joined the “coven” ?

Didi: Word to Comms people, please think about your customers first. For inside jokes only people in your age group will get, that’s what personal Twitter accounts are for.

Terv: The bank that rhymes with Abscess did a spoken word video, and while it was nice, I couldn’t help thinking “not everyday spoken word. “

Didi: I’d like to see some more campaigns that are not performing inclusivity and actually tell us what the brand has done in the past 365 days. Less talk, more action. Was there any brand that did this?

Terv: I think Unilever is the one company that’s top of mind that has made a long-term commitment to gender equality in their organisation

Honestly, I know it’s not always easy, but having a bias for action is a really good way to approach marketing to women. What are you doing to bring awareness to women’s issues? How are you putting your money where you see that it hurts? How are you opening your doors internally to heighten workplace inclusivity and prevent bias?

Didi: Speaking of bias, I liked what Ogilvy did with the nameless CV template and I’d love for them to give it a bit more of a push– work with HR associations and CV writing platforms to ensure it actually becomes a thing that’s impactful in the real world, and not just leave it as a cool campaign.

Terv: That makes so much sense. I enjoyed GTB’s short story shining the light on the fact that over 50% of Nigeria’s informal sector is owned by women. I particularly like that even though the goal was ultimately to sell their “Beta health” product, it didn’t feel contrived. Women need to be protected and improving access to healthcare in the informal sector is one way to go. The product also looks to be designed in the right way with the USSD code and the N500 monthly subscription. It’s a yes for me!

Didi: On a lighter note, I wonder what Tecno’s design team was going through. A phone “wearing” a pink flower and a crown! Must be a heat wave.

Terv: The cabin fever is real.  I was hoping that brands would let Okonjo Iweala rest today but apparently not.

Didi: Fam. Okonjo was the official face of the IWD campaign.

Terv: There are quite a few brands that could have sat this one out: 90% of banks, Durex, Indomie.

Didi: Indomie was celebrating mothers. Someone didn’t get the memo.Good thing is they can replicate the ad next week sunday.

Terv: Pepsi did good. I love when brands take their logo or elements of their logo and build meaning into it. But also, mother’s day is here again! Oh Lord! When I become a mum, my kids better get ready to pay it forward real quick because this is really a lot.

Didi: It’s the first Mother’s day of the year Terv. Don’t be in a hurry, we have about 10 more to go. Loved Pepsi’s. It gave me one of those “campaigns I wish I thought of” moments. To round this off, did You see what the Nigerian Bar association did?

Didi: Fam. Women can be lawyers but only he remains the almighty Judge!  Speaking of the law, almost everyone who did the #ChooseToChallenge symbol looked like they were taking a mugshot, or swearing an oath in court. Not sure who comes up with these Women’s Day symbols. Call us next time bro.

Terv: LOL! 2020’s “Each for equal’s” symbol  was much better. This one was giving me traffic warden vibes for sure. I blame them for this Dano ad. 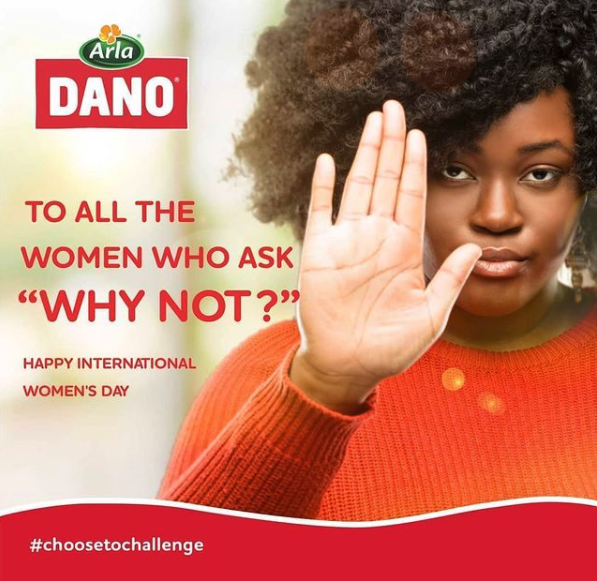 Didi: Lmaoooooo. Dano, I have one question. why?

Terv: So, what’s the moral of today’s lesson?

Didi: 1) Put your money where your campaign is. 2) Less of these webinars and profiling Okonjo Iweala. Your consumers are very well aware that she’s great. 3) Hire women. All year round and deliberately. It makes for a more progressive, inclusive and innovative environment. 4) The most authentic women’s day campaign you can do is treating women fairly within your organisation. You cannot PR or perform your way out of this, so if you’re going to run a women’s day campaign for next year, start now by doing the work. 5) Also, if your creative team puts in the work like Pepsi’s team, put a proper promotional budget behind it. The world deserves to see it.

Terv: Co-sign all the above. Only thing I’d add is that it’s also okay to sit out the “important dates” or just say “Happy International Women’s Day” and call it a day. Gbogbo wa la ma je breakfast last last.

Didi: … and that’s on Mary had a little lamb!

Terv: I bet you have no idea what that means. The other day you went to bed at 6:45pm.

Terv: Anyway TAGB guys! Ask a gen Z’er near you to interpret.

Terv: Clearly I need to change my circle of friends. I’m too young to be surrounded by the likes of you! Bye people!

2 thoughts on “International Women’s Day 2021: How your favourite brands are “Choosing to Challenge””