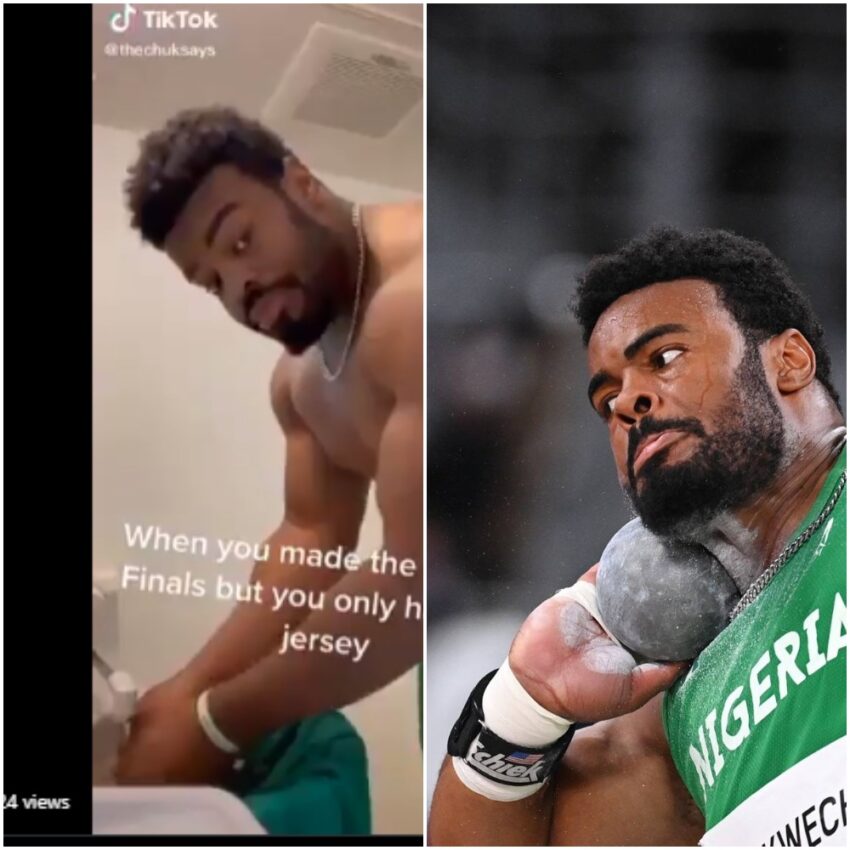 Terver: Is this what happens when you get older? ‘Whemst‘ did I go, dear?

Didi: Left the Bantus without a post last week.

Terver: See guys, Didi’s the type of friend you never commit a crime around. A career snitch! Besides, who died and made you town crier of the Bantus?

Didi: Wow wow. Someone has to stand by the people. Something the Nigerian government is not familiar with anyway.

Terver: Let it be on the record that that was Didi’s comment. We’re on the verge of getting Twitter back, let’s try not to rock the boat, okay.

Terver: LOL! So what are we talking about on this fine Thursday?

Didi: Fam, we’re chatting about missed opportunities and what it means when the image of Nigeria at the Olympics is an athlete washing his only jersey on the world wide web.

Terver: Can’t lie, that image is seared into my brain. I remember seeing a headline days later. Something about “other countries are washing medals, Nigerian athletes are washing jerseys” eishhhh– and this right on the back of our whole #PumaGate jersey scandal.

But let’s start off with some definitions. Broadly speaking, nation branding is the art of taking the same principles brands use in marketing themselves to potential and existing users and applying them to individual countries. India had their “Incredible India” campaign a while ago, South Africa had their “MySAExperience” (we wouldn’t forget in a hurry how Banky and Adesuwa’s #BAAD2017 wedding, was basically a whole leg in the SA tourism campaign), Dubai has every single “biggest,” and “tallest” and “deepest” they’d need for at least the next 10 years. Often the goal is to promote tourism specifically, but nation branding also has merit with promoting the nation’s image, attracting foreign direct investment, and uplifting the reputation of the country for good.

Didi: Guys, doesn’t Terver excel at definitions? I bet you were a teacher’s pet in secondary school.

Terver: LOL. I may or may not have had my head shoved into multiple lockers in junior secondary, but that’s a topic for another day. What’s really important is that while countries like America strategically invest billions into carefully crafting their national narrative, many emerging economies have found other ways to build equity and a brand name for their nations through sports. A shortcut of sorts.

Didi: I’m thinking Ethiopia, Kenya, Jamaica. Oh, Jamaica has done an incredible job! The added beauty of nation branding through sports is that sporting events are competitive and this means people pick sides, there’s a winner, a medal/ trophy, there’s the victory at the end, and in many cases the emotional expressions of victory or vanquish –  it’s emotional and people not only connect with individual athletes but also transfer the equity and love for the personality to the country.

Terver: Yup! Agreed. Now that we have some context to go off on, we’ll try to list out some of the opportunities that we believe Nigeria missed in building some national equity through the Olympics.

Terver: I take it you now identify as a potato 🙂 But sure. The first missed opportunity I think was Failing to Plan. At the risk of sounding like every African mother ever, failing to plan really translates into planning to fail. Given that the Olympics happens once every 4 years and we’ve been participating for decades, one would think that we’d have some structure on lockdown and at this point would have decided things like what we want our legacy sports to be in the way that track and field belong to the Jamaicans and marathons are the birthright of the East Africans. The talent is clearly in abundance but actionable planning to spot, cultivate and birth these talents across various sports was missing. What we had instead were various scandals from the sports kits to the athletes who were disqualified because Nigeria “failed to test them”

Didi: Exactly. With nation branding, to be successful countries must prepare for the spotlight in the same way that brands prepare for campaigns: project management, channel strategy, media training, iterations upon iterations, ensuring that you have the best product in this case people representing you, investing in optimizing and upgrading the talents that you do have.

Nigeria should have had a clear “Go To Market” plan with a checklist of everything that had to be done, and (and this is important), a team of marketers and storytellers.

This brings me to my next point.

Error number 2) Not having a full-stack marketing team.

Terver: Ooooh, I want to hear this!

Didi: You were already going to *rolls eyes* Basically, here’s how I’m thinking about it. You know how anything in life can be made to look larger than life with great storytelling? In the same way that “barely there” songs can be mega-hits with a sprinkle of controversy and some payola behind them?

It’s the same thing with nation branding and branding in general. Having a team of compelling storytellers to really bring out each athlete’s story, speak on where they’re coming from, what makes them special, their journeys. Basically, take the most relatable elements of their journeys and use this to develop a compelling story. This would not only help us on the world stage but would actually induce a sense of nationalistic pride.

I’ve seen Jamaica do this really well with some of their athletes, including Usain Bolt. The US as well with Simone Biles and then I think there could have been an amazing story with Divine Oduduru (Mr “I-never-esperrerd-eet”). The Olympics featured intermittent ad slots showcasing athlete stories from around the world and we missed the chance to have been a part of that. .

Terver: Now which of us is the great definer again?  Really good point tbh. I really would have loved to see Divine and his black man blood on the big screens.

Piggybacking off that point is 3) Not banning your biggest channel for audience support: This has to be the most obvious point but let’s begin from the point that next to Americans, Nigerians are arguably some of the proudest, most nationalistic people. We really do take a strong sense of pride in our ability to survive in spite of and we’re particularly proud of our exports like music with people like Wizkid, literature with Adichie and Wole Soyinke, and Boxing with Adesanya and Joshua. All this to say that regardless of everything if we had the Olympics ongoing and our largest conversion point for conversations was available, the odds are that we would have rallied and shown a ton of support. I remember how for weeks after the Nigerian basketball team floored the American team, that was all anyone could talk about. So the Twitter ban that has restricted the access of millions of Nigerians to the platform was most certainly a missed opportunity for the nation to drum up some fandom in support of the Nigerian teams that represented us at the Olympics.

Didi: Oh yes, seeing as there were also no official channels for communication, no official hashtags we could use for our teams, it all fell through the cracks.

Terver: Also quite difficult to be patriotic while using a VPN you know.

There was also the missed opportunity of 4) Boosting something that’s already a hit. I’ll explain.

You know how with music again as an example, the general advice is to make a really good song or put out really great content or with comedy, craft a really funny joke. You may still have to promote good material, but it’s much easier and cheaper to boost the material that’s already really good on its own! So back to my point, the nation not throwing their full weight behind the basketball team when they won the US team was yet another missed opportunity.

Didi: True. What I saw were private individuals and corporations contributing to strengthening the team.

Terver: That’s exactly right. I can’t help but think what could have happened if they had the proper backing of the nation behind them but sadly what we got was a lack of intention from the sports bodies with channeling the attention into some productive nation branding.

Didi: Yup! Could have served as motivation to perform even better.

Didi: But as you said, a lot more support and push would have even served as motivation for these athletes to perform better. Imagine having the team speak highly of its nation at the conferences and pretty much every chance they get.

I see another missed opportunity here – 5) Media training for athletes.

Didi: Over the years we’ve seen our athletes become the butt of Jokes home and abroad, and we all just laugh about it without considering the effect it has on our perception as a nation.

It’s understandable that most athletes who live and train in Nigeria sacrifice education for this cause and may end up with a poor command of the English language but that’s not the way the story is presented to the media, or maybe that’s just how the foreign media would rather portray Nigerians. Either way, the point of marketing is to shape perception and a good PR team would know exactly how to position our spokespeople in ways that are flattering to the nation.

Terver: That’s interesting. So you’re saying investing in media training and getting our athletes an education that’s sufficient to ensure that they are representing us appropriately on the world’s stage

Didi: Exactly. Good thing is that there are a lot more upcoming sporting competitions and hopefully we can begin to see some intention and better still, some action.  If you are a sports enthusiast that works in marketing, this is your opportunity to pitch to the bodies in charge on how you can help tell the right stories and assemble the building blocks of our national brand.

Side note: We can help review your proposals and give insights on how to make them better. Terv, what do you think?

Terver: Let’s get that bag girl! Any final words Didi?

Didi: Final words? Every national outing is essentially a marketing campaign, so treat it as such. Plan accordingly, tell the right stories, put some money behind these athletes and boost the heck out of their stories, invest in PR, and let’s get the right messages out there.

Terver: Bantus! That’s it for this week. Share with a sports commissioner near you. But also, talk to us: did we miss highlighting any opportunities Nigeria could have taken advantage of here? We’ll be waiting in the comments.

5 thoughts on “The Olympics as a tool for nation branding: Nigeria’s missed opportunity”