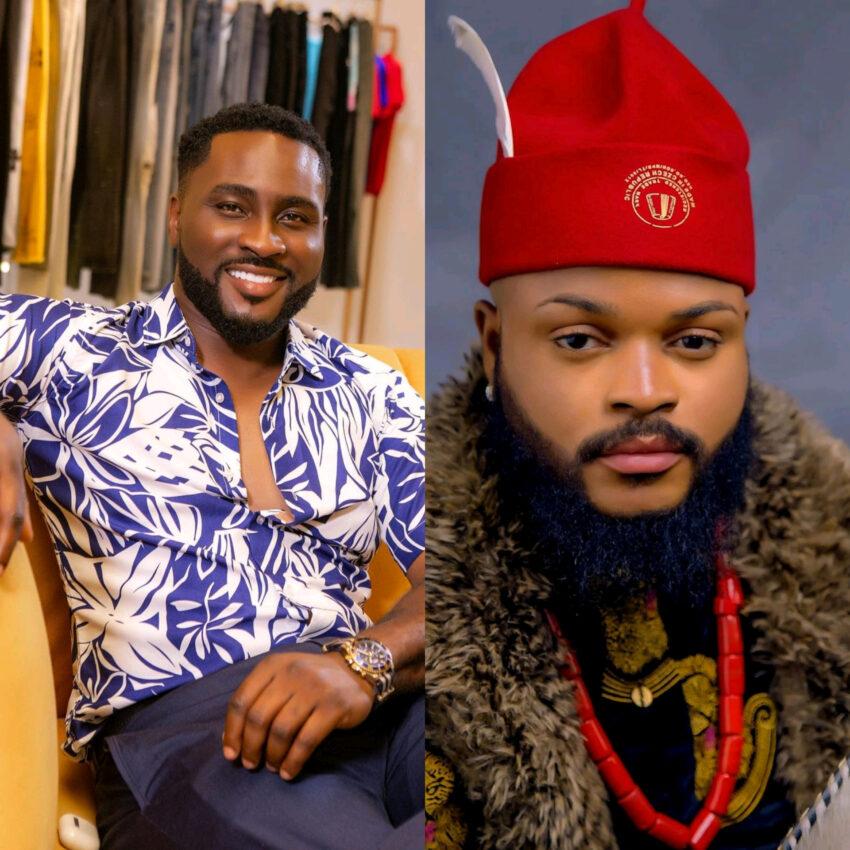 Terver: So today we have a guest minister in the house! Minister Ajoke give the congregation a wave

Ajoke: hahaha, hello everyone. Happy to have you here on my show!

Terver: LEMAOOOO….this is the problem with inviting strange women into your house: they tend to get confused about their station

Ajoke: You know I’m right this is my show. So yes, you are welcome

Terver: That is your business!!!!

Ajoke: “You can lie to everyone but you can’t lie to yourself”-  Ozo BBN Season 5

Terver: He said, right after a day hard at work being about Nengi’s business in Big Brother’s house. A King!

Anyway, for those who don’t know, Didi has been issued 2 strikes for failure to purchase rotisserie chicken for me after several threats and even bouts of begging so I have invited Ajoke to stand in for her this week! But also, Ajoke is my best friend of what? 10+ years now?  So watching her prance around my blog acting like she owns the place shouldn’t surprise you

Terver: Speaking of which, you owe me an anniversary cake missy. Don’t be like Didi, pay your debts. Joins Bantus across the world to chant *Send Terver Cake* *send Terver cake*

Ajoke: When did we talk about cake? Lool. I can tell you for free it isn’t coming🤣🤣🤣🤣

Ajoke: You know what, on second thought, tell me the exact date we became friends and I’ll send you 2 cakes

Terver: So what are we talking about today Ajoke? Since this is your show

Ajoke: Yeah! We’re speaking on the economics of Big brother. Basically how small business owners and regular people can profit off BB Hen!

Terver: Might as well have come here and said your name is Hajoke

Terver:Shame on all of you. But an interesting topic. Let’s lay our some definitions, shall we?

Ajoke: So everyone already knows Big Brother and how for the months that they show is on, it’s all Africa can really focus on. It’s pretty obvious to everyone how the big brands who sponsor and even those who trend hop can make money from all the attention that the show generates, but small business owners and personal brands, there’s no real formula that’s been laid out for them to turn all the Big Brother frenzy and camps into money.

Terver: This year I’ve seen “big brands” spend money on the show with no real idea how to monetize but we’ll explore that topic another day. But this is spot on. I agree that SMEs and regular people are an interesting dynamic. Because not only do they have little to lose by trend jacking, they can also optimize for awareness and conversions with minimal spend

Terver: So today, we’re doing everyone a solid and sharing 4 tips for small business owners/personal brands to profit from the big brother show. On a budget too!

Terver: Tip 1)Pick a “winning” team: Big brother is its own beast. I often say that the game being played in the house is often not nearly as important as the game being played outside the house and the fan wars that go on. Understanding that big brother fans constitute a whole subculture and then being circumspect; so taking stock of prevalent sentiments, using historical evidence to pick up indicators for early favorites and then deciding on a team to throw your weight behind.

Ajoke: Hedging your bets on a “winning” team is very very key. Of course, it’ll be ideal if the camp you pick is a camp you actually genuinely like, but its very much about picking a side that has a lot of fans that can be potential customers for yourself

Terver: Yup! And honestly, these things aren’t hard to figure out. Every year, there’s a flagship (often light-skinned) city girl– it’s easy to spot her because all the hot boys in the first few weeks are scrambling for her attention. There’s also the “underdog” with a compelling grass-to-grace story that the continent never gets enough of. We love a good ascension. There’s also the polarising figure everyone loves to hate who bewilderedly has a loyal following that swears by everything they do and keeps him/her in the house no matter how many times they’re up for eviction.

Ajoke: Right on! So you want to decide early on which camp you’re most aligned with and become a champion for your selected “fave”

Terver: It’s all the better if you pick a team that not only has a wide enough audience, but also one that inherently significantly overlaps with the audience that has a) the need for and b) the purchasing power to patronize your products. So you’re selling gift items or are a personal shopper, you’d be looking to join a middle to upper middle-class fanbase

Ajoke: Yes, you run the risk of alienating everyone who is diametrically opposed to the said team – so best be sure you’re making the smartest choice for your business.

Ajoke: Tip 2) Be a stan where and when it matters most: With monetizing off BBN, the only way to succeed is to go all in! There can be no half measures. This is because there are a ton of people involved and to really shine through you have to be fully invested, I’m talking conversations across Whatsapp, Twitter, Instagram, making videos, sending voice notes, championing strategy, volunteering for the community mobilization efforts. Do what needs to be done to stand out. I can tell you firsthand that it works. I know tons of people who have followed people on social media because “I love how much you love him/her” and before long, ended up purchasing items off them: from bags to hair, clothes, and beyond.

I can never get behind this personally, but the logic is sound. My friend’s friend is my friend. No half measures.

Ajoke: LOL! Basically, when you do this, what happens is, you begin to build your own mini fan base within the larger fanbase of people that value your opinion and will literally take orders from you because of your perceived authority within the base. It’s very military and you can then grow to the point where you legitimately become a commander of the troops and so when it’s time to promote your business, people see is as a way to give back to you and as a matter of loyalty

Ajoke: After all the English I spoke there, you’ve done this simplification. Ruuuuddeeee

Terver: Trust me to step up where it really matters dear. But this seems like a good time to speak on Tip 3) Do “it” with your business name: all of it, the phone number that you use to join the groups on Whatsapp and Telegram, let it be a business account that says for example “Ajokes Creative Hub” or “Terver’s Home of fresh pies” carry your brand with you as you evangelize so you’re driving awareness and recall for yourself as you go along. Optimize your visibility such that every RT, every eyeball, every like contributes to increasing reach. Yes, your support is genuine, but don’t lose track of this easy step to leveraging impressions and growing your audience through the base.

Ajoke: So much oil on your head! This brings us to Tip 4) Throw in your hat for opportunities: when the opportunity to bring your business to the table presents itself (and it always does), step out fully and without reservation. You were created for such a time as this. There are always planning committees that require products and services whether it’s purchasing a car, house, land, gift items, shares, or converting funds to FX. Opportunities are everywhere and you shouldn’t be afraid to push. If you’ve built to the point that you’re a recognized VVIP with access to the star, then don’t hesitate to send your business’s flagship product as a gift with the hopes that your fave would be gracious enough to post about it and tag it on their page or stories.

Terver: If you’ve spent 2-3 months of your life ruthlessly defending and invested in a housemate’s stay, you can’t be shy now. Be ruthlessly pragmatic and promote yourself. You’ve earned it.

Terver: Errrmmm, this reeks of nepotism, but okay babe

Ajoke: Lol! Thanks for having me T! I had fun doing this

Terver: Of course you did. I’m awesome. Now send me that cake missy!

Ajoke: I set myself up for that one! Haha

Terver: *sigh!* I really do need new friends. That’s it on the blog today Bantus! Got some more tips for small businesses looking to move from fandom to profits through the Big Brother platform? Share your thoughts in the comments!