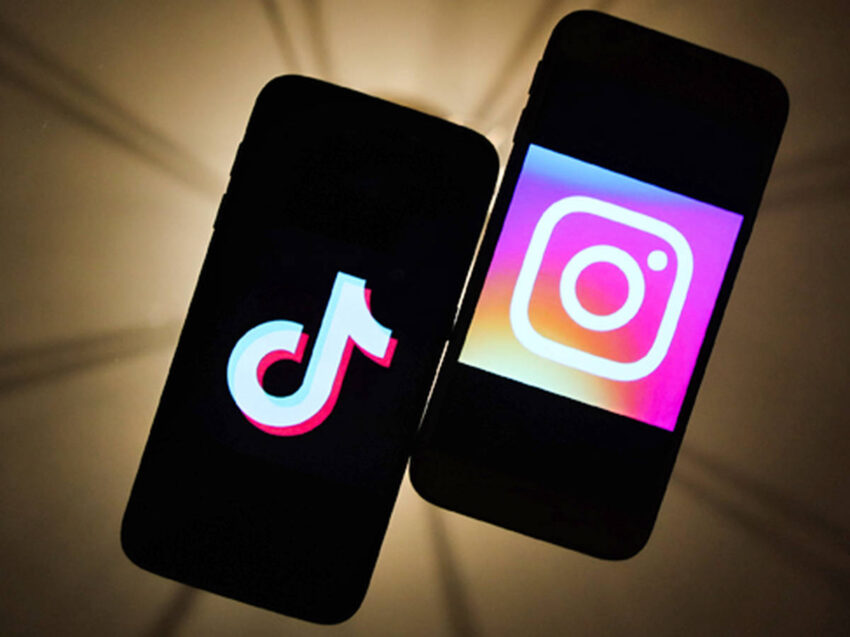 Terver: Of course, you’d know so much about this, being a closet Davido stan

Didi: I don’t know who that is.

Didi: I’m just glad my people know me for who I am. Hey Bantuses!

Terver: Every week, it sounds like you’re nudging this Bantu name further and further into the trenches. Which one is Bantuses now?

Didi: Plural of Bantus please. Just as the Queen taught us.

Terver: And that, ladies and gentlemen, is why you should invest in quality primary school education. What’s the most ridiculous thing you saw happen in the marketing world this past week, Didi?

Didi: The “Head of Instagram,” Adam Mosseri made a video he shared to Twitter to tell us why we should all make videos on Instagram. Funny how Twitter is the globally accepted platform for press announcements; even for people who own social media platforms of their own.

Terver: LMAOOO! You know, even agba CNN and Aljazeera feed from Twitter. I watched a parody of the video before I watched the actual video and I must tell you the parody was a much better watch. Somebody said when a tech bro hits you with the prayer emoji, you know the absolute worst update is about to be rolled out! 😂

I like that they didn’t push their PR person to do this video and it was their most senior operational/strategic leader.

Anyway, nobody asked, but my most ridiculous non-marketing thing this past week was finding out that Didi has a secret Twitter page for her loved ones that I’m not a part of.

Didi: Lmaoooo. Not you trying to air me outside. The Twitter page is public. You were following the private one. Doesn’t that say enough about how you’re in my inner-est of circles?

Terver: Scam! But, your thing brings us closer to our topic of the day; a lot of people– from creators to civilian users are complaining about how jarring the Instagram feed is getting, with recommended posts from people we didn’t invite to our feeds, and so it’ll be interesting to get into what we’ve learnt from consumer behavior and answer the question “Will Instagram die if it doesn’t chase TikTok’s model?”

Didi: I believe it will and here’s my thought process: Instagram is optimizing for younger users who are creating at lightspeed using platforms like Tiktok. If they do not cater to these users, they just might become to Gen Z’s what Facebook has become to “Millenials” – a place for the oldies.

I love the term “civilian users” by the way because in a sense, it speaks to how casual everyday users who simply scroll and lurk have very little control and are not really the ones who dictate what platforms are cool or relevant.

Terver: That’s Kim Kardashian’s job aye? It’s interesting you’d say that, because a lot of this community engagement and rolling back updates Instagram is now doing happened suspiciously right after Kim and her sister lent their voice to the #StopTryingToBeTikTok campaign.

This thing about how influential creators are (or at least should be) reminds me of something our good friend, Ajoke has been saying for months. For the longest time, Instagram has indeed neglected creators. Fundamentally evolving their algorithms to be unfriendly for creators to be discovered and build any sort of organic following. Creators have had only 2 paths to growth: a big bang explosion of super viral content or paying for sponsored posts.

Creators have been complaining about this for a long, long, long time. Then comes TikTok, that’s basically a creators dream come true because it’s built around exposing you to new audiences, so naturally, TikTok has become your average creators preferred platform.

Didi: They even have multiple ways creators can get paid outside of working with brands: merch, a creator fund, even directly from your audience with tips (really cool Stripe integration btw).

I think we’re generally in agreement that evolution is necessary for survival. What I’m pondering on though is, is there a point where in the name of evolution and catering to every need, you end up committing the biggest sin of all: trying to be all things to all people? Hear me out, Instagram has dubbed Snapchat with Stories. Dubbed live TV (and Clubhouse) with Instagram live (sidebar: I remember setting my alarm to watch Zikoko’s speed dating show every Friday during the pandemic) and arguably tried to dub YouTube with the now defunct IGTV.  Basically, where does it end?

Terver: Before I attempt to answer that, It’s interesting how in the midst of a passionate brand conversation, you somehow find the time to remind us of your waywardness.

I think the short answer is that right now, Instagram is proof that shameless copying can pay off. If you think about how much of what Instagram is today originated from Snapchat in particular (filters, disappearing messages, stickers), then you’d understand why I’m honestly shell shocked when they release any sort of original feature.

And you know what? This fits right into my theory that the brands that die don’t get killed by competition, they simply find creative ways to commit suicide. Consumers clearly don’t mind a copycat if it does the job well and at the end of the day, the minute you stop adapting and staying nimble to compete, there’s nowhere to go but down.

I guess my point is, the world is truly moving to video content and for good reason– there’s more of a connection to be made from video content versus static ones and anyone in the marketing world would tell you video always performs better because that’s just how humans are wired; we connect with things in motion on a much deeper level than static imagery.

Didi: Touche. One of my favorite KPIs to track for platforms is “Frequency of High Value Actions.” You see those activities that help you optimize engagement and revenue? Smart marketers know to optimize for those. In the case of social media platforms, “high value actions” are mostly the published content from brilliant creators that keep other creators and “civilian users” engaged on the platform for as long as possible. If you look at it from this lens, you’ll see why it’s important for Instagram to create a more enabling environment for a this rising generation for whom creating is second nature.

Terver: Big facts! Think about Clubhouse at it’s peak and how they lost out to Twitter because the high value action of enabling thousands or millions of people to participate in a conversation in one swoop just wasn’t possible on the platform. So you’d find a few speakers on stage in Clubhouse, and the vast majority of people listening in on the platform, but flocking to Twitter to share their thoughts. The speed with which Twitter reallocated resources from that poor man’s version of stories: “Fleet” to launching “Spaces” was the best uno reverse i’ve seen in ages.

Didi: Clubhouse iteration speed was way too sloowww. My word. In fairness, no one could have predicted that user explosion they saw. They were literally in beta testing when it happened.

Terver: What I also find interesting is how unreliable direct consumer feedback can be as a decision making tool. Users can be saying one thing and saying it very loudly, but a look into their actual behavior could show you a whole different story. I enjoy qualitative research as much as the next marketer, but I’m also mindful that there’s a lot of motivation to lie in a crowded room. Nobody knows this more than Meta. They’ve literally seen a mass migration out of Facebook in our generation. They’ve read all the think pieces about how they failed to ‘keep up’ and lost out. They’re currently experiencing their first ever revenue decline). Must be tough aye?

Didi: LOL! When I see those polls that ask “Would you pay x amount for this?,” a little part of me dies, because you’re deceiving yourself and your strategy team. But, there’s a lot of power in observation; watching how people behave, which is a type of qualitative research and sourcing data points to match with user behavior. With all that’s been said about snapchat, apparently, they are still the number one instant messaging platform for teens.

Terver:  Not gonna lie, anyone with a snapchat account in 2022 is a little suspect to me. But back to our conversation, we’re in agreement that Instagram basically has to do what it’s doing now in order to survive. Which brings us to the other question of the “How?” Basically, do you think that Instagram is handling its pivot in the best way?”

Didi: I’d say they’re not. We all saw unknown people on our feeds for weeks and they only responded when our Queen mother, Kimmy Cakes spoke up. Apple is a good example of how rollouts can be done in a seamless way. First, is having a community of influential beta testers who by virtue of having exclusive access, feel like they own the product and then go on to advocate on your behalf in ways that seem super authentic and relatable and help civilian users better manage their expectations. What other thing would you say they should have done, Terv?

Terver: Emmm, excuse me, you really thought we were just going to breeze past calling Mama North, Kimmy Cakes? Sometimes it feels like you don’t know me at all. Lemaooo.

I agree that a fundamental thing would have been just generally preparing us regular folk for the changes we’re about to witness. Clubhouse used to do this “What’s new” thing and it made me feel that they thought highly enough to at least let me in on the “what” and the “why” – it’s really a thing of managing perception.

Didi: Whatsapp started to do that in their stories after the last major backlash. Doesn’t hurt to proactively communicate those changes – not just in some hidden T&C or by springing ‘gotchya’ updates on us. This is not a Beyonce album, please be super obvious about any new releases. Instagram can have their own Insta Story that pops up whenever there’s a change. Another thing is making users feel heard – for example making upgrades to features users love while at the same time introducing something new, so it feels like a fair trade.

Terver: Fair trades are an interesting thought. Along those lines, I would say what they need to do better or just differently are trade offs. They really need to make some sacrifices to show that they care about the things they say they care about: helping people find more of the content they enjoy. So really perfecting these algorithms to make sure that creators are discovered by people who’d actually find their content interesting enough to engage with and de-emphasizing creators’ needing to fund sponsored posts for visibility for a while.

Didi: True. I shouldn’t see someone turning Eba on my timeline just because I liked my co-workers wedding video one month ago.

Terver: Screaming! On that note, it’s a wrap. Bye Bantus.

Didi: Don’t forget to drop a comment. What are your thoughts on IG’s copycat strategy? And is there anything else they can do to make the transition more seamless for more people?

2 thoughts on “Will Instagram die if it stops “trying to be TikTok” ?”