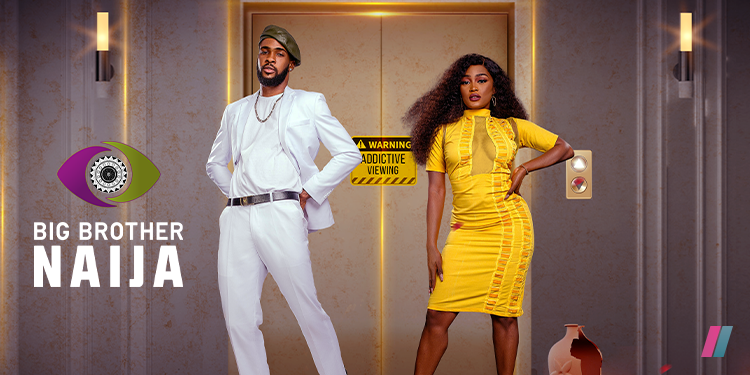 Terver: Bantusssss!!! Have you missed us as much as we’ve missed you?

Didi: I think Bantus’ are due a new name.

Terver: As per rebranding? Why are we fixing something that’s not broken Didi?

Didi: No idea. I don’t like the vibe anymore.

Terver: If we ever needed confirmation that Didi was a Tech bro, this is all the proof we need. Making big life decisions on the singular metric of “vibes.”

Didi: To be fair, I’ve become one.

Terver: Become? As per recently?  You lie a lot.

Didi: So much slander. After I bought you chicken. Anyway, it’s good to be back here, Bantus’

Terver: The ‘chicken for silence’ subscription needs to be renewed. But outside of giving me hush chicken, what are we bantering about today Didi?

Didi: Our annual dissection of Big Brother Nigeria ads. Our very own super bowl, only without Rihanna.

Terver: Haha! Saw the funniest meme about Rihanna needing to relearn her own lyrics ahead of the ceremony.

But on Big Brother, this season has been pretty tame with the numbers unfortunately and I reckon it’s largely due to the upcoming elections. But clearly we’re not letting that stand in the way of our dissecting the hits and misses with this year’s ads.

Didi: Don’t know if it’s just elections or the market downturn contributed as well, but it’s the first time I’ll see brands in key sponsorship roles, not create ads specially for the show.

Terver: Sounds to me like a jab at a brand that rhymes with motherflave but let’s dive straight into it shall we?

Didi: Cool, so before we begin, it’s important that we define what makes an ad good or bad. Regardless of what we rate these ads however, ad effectiveness is on a spectrum. The fact that an ad is poorly executed doesn’t mean it doesn’t work to drive specific objectives. So Terv, since you had a distinction in Marketing, please define what a good or bad ad is.

Terver: lemaooo! Call me a borderline nerd with chest abeg, but my thinking is that we evaluate each ad on the basis of the below:

Didi: See why you won all those awards? I’d love to begin with the one that got me really confused. Supa Komando. So much star power, so little stars.

Didi: There was no star ni. No magic. It didn’t give that mmmppphhh.

On a more serious note, the execution was similar to something we’ve seen from Glo in the past and is really not a unique style so I wouldn’t say it was distinct. I’d say it grabbed my attention early on because I wanted to know what it was about but my interest also fell off very quickly. Not sure who their core target audience is but I hear they’re rivals with brands like Fearless, which makes them mass market enough that the execution should be more compelling.

Terver: I agree that the ad failed in distinctiveness, but I have to give them a + for their understanding of the BBNaija audience. Supa Komando is a 7up owned brand with nationwide distribution, so strategically having BBN alumnis who represent the key parts of the country makes sense. The audience also generally enjoys seeing familiar faces as it plays into the whole “this platform helps people blow” narrative.

Didi: Ah, fair fair. It actually didn’t click that those guys were ex housemates so that makes sense I guess. But beyond the star power, the messaging might have been lost on the audience. I don’t think “fire on” is a term Nigerian youths are familiar with so they might have lost points on the call to action bit.

Terver: Hmm, my thoughts here are that while “fire on” gives full 50+ Nigerian sugar daddy vibes, it gets a pass as a call to action for an energy drink in a nation where moving in spite of is a badge of honor.

Didi: Certainly doesn’t pass the shareability/amplification test. There was no trigger to make people want to share with their friends; not for good, or for banter.

Didi: I’ll give it a 5/10. A lot of effort went into it. I also think that brands very easily fall into the trap of letting celebrities carry the entire ad on their backs and then do a less than average job of zoning into their messaging. In this instance, Supa Kommando did exactly that.

Terver: Okay! Next is the “Send by Flutterwave” ad with Wizkid. I’m just gonna come right out and say if anyone else had introd an ad for a remittance product with “Knowing who you are starts with knowing where you come from” I would genuinely have rolled my eyes at how literally the messaging was interpreted.

Didi: Lol. That entire ad was so not Wizkid. My word. Why do people take celebrities out of their skin? Wizkid is known for many amazing things, but speech reading isn’t one of them. I see the same star power problem here. They made Wizkid to do all the work while making him unrecognizable. A whole Machala turned Bogobiri Poet? ah!

Terver: I had so many thoughts after watching the ad: first, was there a clause in Wiz’s contract that said he wouldn’t mention their brand name? Why was the call to action that his name is Ayo Balogun and he’s made in Africa? What does that have to do with the product? For a brand that’s trying to gain market share in a highly regulated and competitive market, there’s also no call to action. no offer or first time code to inspire trials. Even if one argues that it’s an awareness/brand building ad we go back to number one. which is he never called the brand name even one time. Yes there was some product in action but the ad was built more around the voice over narrative than the visual direction. It all seems like such a waste tbh.

Didi: They might be the first client not to ask to make their logo bigger, so please let’s give them that. But for real , if they were even just looking for brand recognition, Wiz has the power to help them do that. Brand mentions would have sufficed, but well… we’ll never knoww.

Terver: LMAO! I think there’s this growing idea that brand building is more important than growth marketing and while the place of brand building cannot be downplayed, we need to remember that the brand ultimately exists to support core business metrics.

Didi:  Fam. Ads like these are the reasons people think investments should give them 300% returns, because tell me which salary she used to buy all those? For a financial brand, I believe they could have done better with the messaging.

Terver: I have to say nice tie in with the level up copy in the ad given that that’s the theme of this season. Honestly, the ad ticks all boxes of grabbing attention, being memorable and even being shareable (even though a lot of the sharing was to say “ahahnnn nawww what type of playing is this?”). The big issue is that the ad terribly over promises on ROI. There’s a small part of me that wonders if the entire rationale of using a cleaner was a social experiment to see how far Nigerians can stretch our suspension of disbelief.

Didi: Fair. To be honest, it was a very enjoyable ad and you’d only query it after it ends, so yes to suspending disbelief. It was a unique story line. “People like me” is very memorable and the repetition helped as well.  What would you rank it?

Terver: We have our first 6.5/10. Would have been a solid A if they went a different route with the segmentation choices.

Didi: Then you’d have ranked them lower for shareability. Someone cannot win with you people.

Didi: Speaking of the most high, Somebody’s son crooner starred in the Tecno ad. Did you notice the adapted Apple/iPod ad style? No words, just colourful silhouettes and fast paced Afrobeats music. It worked. Loved it!

Terver: LMAO! Why didn’t we get a bowed head or at least a praying mantis pose in honor of the great Alakorin. Such a missed opportunity. But seriously, I really love the simplicity of the ad, how the overall theme worked with the background music and how well they managed to center the brand without looking tacky. So this ad is a great example of keeping Celebrities within their skin and using their star power to propel the brand ahead.

Didi: That’s it really. Leave the Gigabytes and RAM conversations for Apple and Samsung to keep arguing over. Tiwa is fine. Tecno is fine. Please buy us.

Terver: The aforementioned Alakorin. But the ad is missing a call to action. Even a tagline would have been nice. Shame it ended without a message to wrap up the greatness we’d just witnessed. Would have been nice to take something away.

Didi: LMAO. Honestly can’t blame them. Tiwa is beautiful. The producers must have lost focus.

Terver: Haha! Moving on to Storm body spray. I think I went through a few different emotions there: first awwwwing at the cute mummy daughter rivalry dynamic and then wondering hmmm did they just show their product in action in a completely different way from how the product is actually used?

Didi: The kid sprayed it into the air. It was confusing. Are they implying that that’s the best way to use their product?

Terver: Yeah! She’s definitely old enough to know where deodorant goes. That “spray a scent and walk into it” approach is for core perfumes no?

Didi: Bantus please tell us if we’ve lost the plot here. But I loved how short the ad was. Straight to the point. Very centered around the smell and the product benefits. Very Nollywood-eque though..

Terver: Well it was short, until the press statement was added at the end

Didi: They rushed through the ad so you could spend some time at the end.

Didi: Giddy and Claire? Our fascination for English names will never not surprise me.

Terver: Isn’t your middle name Amanda? Anyway, we have a few more ads to go through, so watch our for part 2 guys! Might make a nollywood classic out of it and do a 3-part series.

Didi: Just grateful we don’t do middle names where I’m from. See, part 4 might even come out if you people don’t take care. Our eyes have seen shege and we can’t wait to talk about the many other ads in our next episodes.