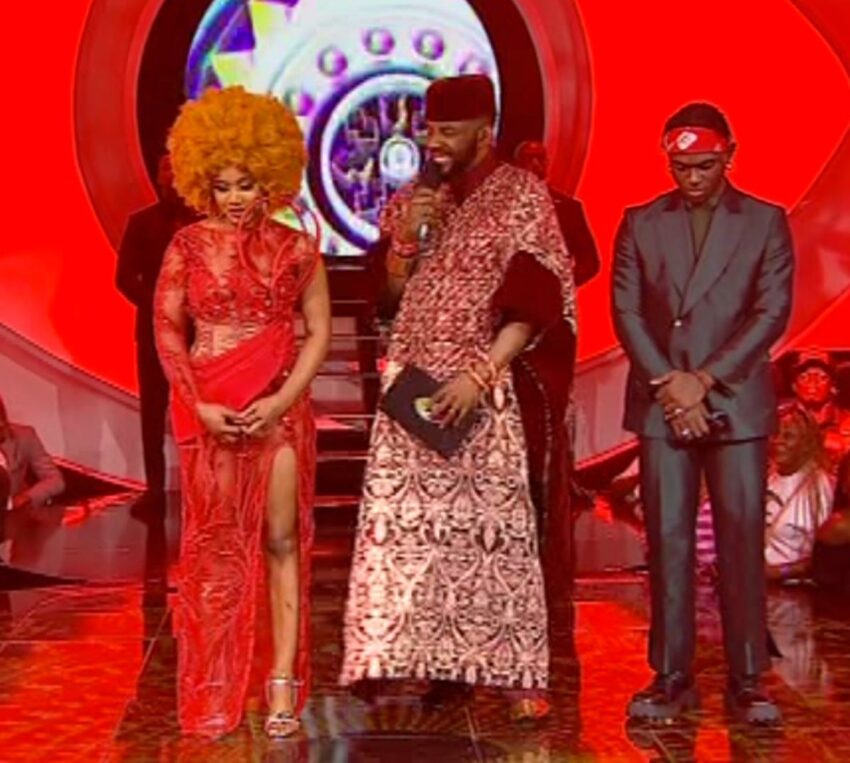 Didi: Yuknowww! Being consistent and what not.

Terver: Consistent Queens. Women of substance.  Full disclosure, we’re writing this after a very interesting ‘we outsidddeee’ weekend, sooo this might be reflected in one or two slurps.

Didi: “We?”. Terv now speaks french. But truthfully, anything you see today, just take it. So, part 2 Terv?

Terver: Part 2!  Before we begin, if you haven’t read part one of our Big Brother ad review series, do an about turn and get caught up

Didi: About turn? You Lowkey have mummy energy

Terver: Ahhh, before we start discussing my ovaries, let’s open the floor with my most problematic ad of the entire season: Nexus electronics. It’s telling that the most memorable line from that ad was “We increase production as revenue”

Didi: That means you didn’t see the nicely placed Nexus ad in the family’s kitchen? On the cooker? Brand people, let’s do better. I’m on my knees.

It’s good that they thought to do well by properly representing women outside of stereotypical domestic settings, but why then make her say rubbish?

Terver: Lmao! It felt so forced. I bet the brief read something like “Our target audience is the modern woman, active on Twitter, (probably) wears femco yellow.”  Like they made such a show of it that it felt more contrived than anything else.  Also the video quality itself was jarringly poor for a brand with enough resources to advertise on Big Brother.

Didi: The woman shot it on her phone so she could increase production as revenue.

Terver: LOL! Didi, I really think you should consider a career in standup comedy. Back to the ad, they showed a lot of ‘product in action’ which makes sense but you see this thing where ads are released with zero value proposition and neary a reason to believe, I don’t get it.  Is the device more powerful? more efficient? Why should I choose Nexus out of all the products in the market?

Didi: Trying hard to not say “Because you’ll increase production as revenue.” I like the product in use as well, but because they spent so much time focused on the narrative, it got distracting. I’d argue that their goal might have just been awareness though. It was the first time a lot of us were hearing about the brand.

Also, don’t tempt me. I’m considering taking a sabbatical next year; might just spend time in Irish bars doing this.

Terver: We all know you’ll wind up downing Guiness instead of focusing on what would have been an illustrious standup career, but I digress. I almost want to agree with you on awareness but they didn’t even say the name often enough for me to walk away with Nexus sticking to the top of my brain. The only thing I’ve become more aware of is how we increase production as revenue? What’s the verdict on this ad?

Didi: For letting that grammatically and technically incorrect line fly, I give it a 1.1/10. Production teams have producers, copywriters, editors, etc. Someone should have flagged it.

Terver: Wow. A record breaking 1.1/10. Eissshhh. Let’s switch things up a little. Wanna guess what my favorite ad and brand on this year’s show has been?

Terver: LOL! Not quite. I’ll give you a hint: “Crypto Mbappe”

Didi: Ah, Don Baba J. Not a fan of the brand because I hear they slashed salaries while sponsoring BBN but go on. Why were they your favorite?

Terver: Oh wow! I’m hearing this for the first time. That’s nonsense in many many ways and rather disappointing.

I had started to grow a fondness for the brand given the clear strategy they approached this year’s sponsorship with. The ad with Don Jazzy ticked all the boxes: catchy and shareable with Jazzy’s natural charm, good celebrity influencer fit as Jazzy really is a crypto hobbyist, clearly communicated and easy to digest value props and a clear signup call to action. They even ran an unbranded QR code campaign that had the most cynical of us curious to know what was going on and I read a report that their site crashed after that, so you already know signups grew exponentially with a campaign like that. It was all so conversion focused while raising brand awareness and proof that a sponsorship can do multiple things for a smart brand.

Didi: I only just watched the Crypto Mbappe ad and I love love the use of Don Jazzy. He was himself, in his element. Wasn’t made to read some random poetic script but spoke in his own voice. Pretty good use of an influencer there.

On the QR code, Coinbase did that same thing earlier this year on Superbowl and I’m not a fan of blatant copying, so mehhhh.

Terver: Lol! Is it a coincidence that Coinbase laid off 1000+ staff after that ad ran? Spotting some trends here.

Didi: Lol. Quidax is now selling dollars because the market is toughhhh, so let’s hope their product expansion efforts helps their business. Well done to them sha. Verdict?

Didi: Lmaooo. Fair. What did you think about the “Indomie” ad?

Terver: You mean Minimie right? It felt a little ‘skittish’ thanks to Basket mouth and a few other slightly familiar comedic faces. It wasn’t great, but it’s not a bad ad. FMCG brands just want to stay top of mind and do great distribution so you remember to reach for them off the shelves when you have the need, the ad is memorable enough that it does that.

Didi: Yup. It was an enjoyable watch. Didn’t try too hard to sell calcium and other benefits they clearly don’t have. I just need them to find a way to let the housemates know that they are not “Indomie”.

Terver: Thats like trying to get us to stop saying ‘Up Nepa!.’ Is it slightly unbelievable that it took a group of hungry people that long to notice the odds cannot favor one person that long?

Didi: Something that from the second spin, I’d have scattered the game. I guess exaggeration is a thing in advertising, so let’s give them that.

Terver: Hmmm, fair. I’d just like to point out that despite having a pretty good ad, their product display strategy in the Big Brother house was embarrassing. The entire strategy was “Just spread it on the dining table” – it’s “make the logo bigger” raised to the power of 100. I think that deserves at least a -0.5.

Terver: Lowkey thought you’d fight for them, but you clearly haven’t had your daily dose of Dano milk.

Didi:  Fammmmmmmmmmmmm. Why do milk brands do this? why?

Terver: You mean inspire people to go for it??

Didi: Never seen a superhero drink milk, so it’s not adding up.

Terver: Errrmmm, excuse you. The superhero is in all of us. This is why Nigerian creatives always say the market is not ready for their creativity. It’s people like you that don’t get it.

Didi: I personally don’t. The Dano ad shows a kid who is scared to write an exam but still goes in. Did he really have a choice?

Terver: In the Nigerian climate. education is not really a choice. But the ad with the man that needed to workout makes sense. Gym freight is a real thing. I guess they just thought– how do we interpret this for different audiences and to be fair. exams can be daunting. He could have faked a sickness like I did on the morning of every Yoruba exam.

Side bar: Thanks to Naira Marley and Asake, mo soro Yoruba gidi (crosses fingers and toes that this is a real sentence)

Didi: It should be mo soro Yoruba da da. Ugh.

Didi: Our names mean the same thing, so this math I’m mathing means I can. The quality of the ad was also so bad. The Nexus lady must have shot it.

Terver: LMAO! If Dano says they’re increasing production as revenue, I believe them. Does the ad tick any of our performance boxes?

Didi: Just begging Nigerian beverage brands – milk, milo, look for a new narrative. Your beverages are not helping anyone achieve anything besides staying in good health or getting their weight up. Explore these.

Terver: I think the ad had some degree of memorability. The color theme did something for them, especially since no brand to my memory had red as a primary palette color

Didi: Didn’t tick any boxes for me, I’m sorry. Can’t even remember any line. The style of storytelling is cliche, and I wouldn’t share it.

Terver: That’s because you’re not drinking enough milk to be able to go for it. Sha give your verdict so we can move to Pauket.

Terver: Not even for the brave little boy that faced his fears? Wow! Adults are mean. What did you think about Pocket’s ads this season? As headline sponsors.

Didi: I’d say they did a pretty good job. Since their Abeg days, they’d set high standards for their ads and I’m glad to see that those standards didn’t drop. The storytelling worked for me and this time, it wasn’t just awareness; their product messaging was clear. The use of young characters also fit in with the brand’s positioning.  What did you think?

Terver: I think they had pretty good ads and their value proposition was clear– although pretty generic. “Sell faster, pay faster” is something that everyone from OLX to Flutterwave and even Jiji can say, so it doesn’t feel as fresh as I reckon they would like a new product to sound.

Didi: Sometimes messaging doesn’t have to be revolutionary. That’s what got Nexus into this mess. Realized that in advertising to Nigerians, sometimes, you want to be as straightforward as possible.

Terver: straightforward is good. When it comes down to it, it’s insightful ness or the lack of it that matters and I’d say the core idea of succeeding inspite of us shows some meaningful insights.

Didi: Agreed! I’ll give them a 7/10. Would have been an 8 if their copy was more differentiated.

Terver: This distinction smells like an Arya Star crush to me, but as I also love the babe, best to be quiet.

Didi: E dey rush!  Jokes aside, I believe the ads were memorable, enjoyable, and the message was clear.

Terver: Before we wrap up, we need to talk about Tayo Aino’s Travel Beta ad for two reasons ) the “go with travel beta” jingle is actually super catchy, i’ve caught myself humming it a few times and b) Tayo is a great and natural influencer for a travel brand and the ad looked more like a collection of travel YouTube videos than a manufactured ad. I’m not mad at it at all.

Didi: They have the best jingle I’ve heard n a minute. Now their mobile site just needs to work. If you’re reading this, please fix your checkout process abeg.

Didi: I’ll give the ad an 8/10. Short and sweet. Engaging, memorable; and beyond the messaging, you don’t forget their name because they’ve made sure of it.

Didi: It’s been fun analysing the ads. Can’t wait to do this again next year. Hopefully my ad people learn to not put all the weight of ads on influencers, when they use them, they use them in their elements. They also learn to hire good production houses if they’ll be advertising on the most watched show on Nigerian tv. Look for differentiated narratives so your ads can be memorable for consumers.

Terver: Yup! And whatever you do, please don’t increase production as revenue.